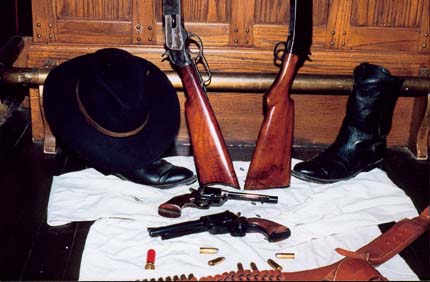 Cowboy Action Shooting (CAS) is the fastest growing shooting sport in the world. Matches are held by a local clubs, or "posse", and generally conform to the rules set forth by the Single Action Shooters Society (SASS).

Locally, there are clubs in Renton, Snoqualmie, Puyallup, Poulsbo and Marysville. For more information about Cowboy Action Shooting and SASS, click the SASS logo below.

I have wanted to try this exciting type of shooting for over 10 years, but never quite got around to it. CAS is shot using a variety of old-west-style guns and gear. Most stages require the use of one or more single action revolvers, a lever action rifle and a shotgun. Sometimes there are side matches involving derringers, pocket pistols or long-range rifle shooting. Every shooter is also required to dress in period style attire and to adopt a shooting alias and persona. Safety is the absolute number one concern at these events. Having fun is number two and doing well for yourself is somewhere down the list. All events are shot against the clock and scoring is based on the best times. Shooters are divided into categories based on the sixguns they shoot and the type of powder they use (modern smokeles or black powder). Full details can be found on the SASS website.

On June 3, I finally took the plunge and shot my first match with R.U.C.A.S. (Renton United Cowboy Action Shooters). I put aside my standard name and clothes and transformed myself into Teddydog, a frontier gambler and shootist trying to make a name and reputation for himself. You can see my gear and duds at the top of this here page. My main sixgun is a Ruger Blackhawk in .45 Colt with a 4 3/4 inch barrel. This gun puts me in the "Modern" class. My second revolver is a Colt Single Action Army (SAA) replica, also in .45 Colt. The lever action I chose is an Italian-made replica of an 1873 Winchester short rifle (once again in .45 Colt caliber). The scattergun is an original Marlin Model 30 pump gun in 16 gauge. This gun was made in about 1910 and meets SASS rules that allow exposed hammer pump shotguns like my Marlin and the Winchester Model 1897.

There were three dozen fellers and ladies that day and I managed to shoot myself to 28th place. I was very happy with my shootin, but my speed sure does need improvement! For one thing, the pump shotgun put me at a loadin disadvantage. Ya see, them rules only allows a feller to load two shells at once, so that new-fangled tube magazine don't do no help 'tall. I also wasn't fully prepared nor practiced with my loadin and I discovered right on that fishin them shells outta my pockets weren't no damn good. I'm workin on keerectin that situation.

Anyways...here's a few photographs that might help you get a better idear what this is all about! 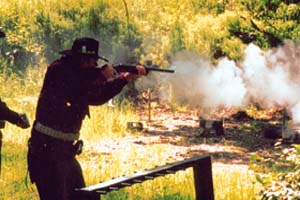 This pardner is shootin black powder in his double-barrel shotgun! I don't recall fer sure, but I think I recollect that this is Carlsbad Kid. 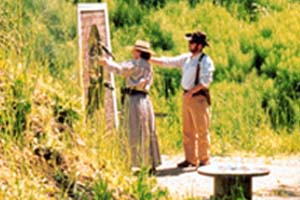 And 'taint just fellers doing the shootin, neither. This here is a real lady! 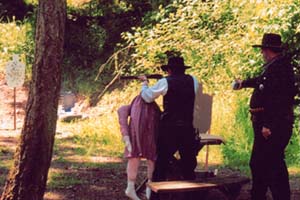 Most stages have at least one twist to 'em. In thisa one, you was protectin "Big Nose Kate" by keeping "her" on yer person throughout the stage. Here, Abacus has his weak hand through the ties of her dress. Some folks just slung her over their shoulder or even held her between their knees! 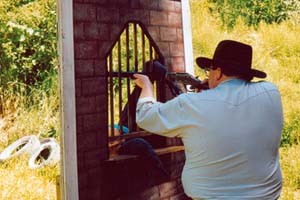 Okeedoke. You finally get to see this Teddydog feller. Here he is takin' on the bad dudes through the bars of the teller's winder. See the dead banker draped in the winder? And alls he wasa doin was putting his gold in that there bank when someone had to try and rob it. Dang it, he hates shootin folks before lunch!. 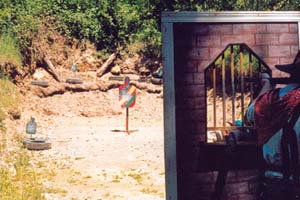 Thisun here shows what some of the targets look like. We was shootin them metal plates. This stage was perty long. We started with our rifle to hand and shot it dry at the back four targets (two shots each). Then we's pulled our first pistol and shot the near targets, then drew the othern and shot 'em again. That left us with 3 empty guns, so we reloaded the rifle with 6 more bullets and let 'em fly at the nearest, then the back uns, then the other near target. Finally, we reloaded one sixgun and banged all 5 shots at the big green and yeller dude in the middle. Oh...and all shots were fired THROUGH them bars! 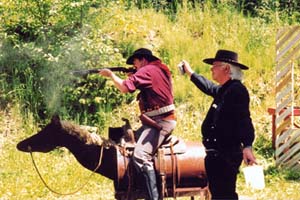 This stage started out with the shooter sittin the sadle of the, err, horse. 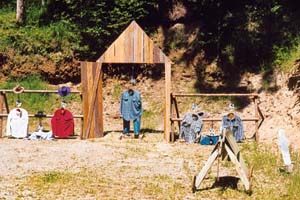 This is the view from atop the, um, horse. The targets are the leettle plates rep'sentin the bad guys' heads. Good thing we had the rifle! Woudda been tuff with a little old revolver. The white target to the right of the "mule" is a popper for hittin with a shotgun. 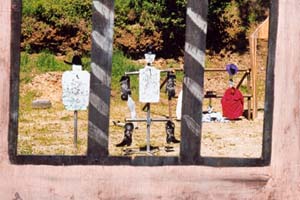 This view is through the bars of the jail house. See that one to th' middle? The boots, gloves and hat? Them's was the targets for the first pistol after getting off the, ah, horse. Then it was into the jail, unlock the cell, put a rope around the murder's neck and throw the rope over a beam. Out of the cell and use the second pistol to shoot the two big white bad guys through the bars. After that, all we had to do was stroll outside, pick up the scattergun and blast the 4 popper targets waiting fer us! Whew! That was another long un.
After my first shoot, I'm already hooked on Cowboy Action Shooting! I'm already planning improvements to my gear and practing my loading and drawing from my holsters. Go ahead and give it a try! You'll be roped, too!